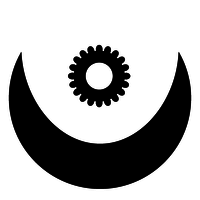 Osram ne Nsoromma means “moon and star.” It is a symbol of faithfulness, fondness, harmony, benevolence, love, loyalty, and femininity, from the proverb, “Kyekye pe awaree,” meaning “The North Star loves marriage.” She is always in the sky waiting for the return of the moon, her husband. (Bruce Wills)

Literally: The journey of marriage is long.

Marriage is forever. Only death should separate a man from his wife. Divorce is frowned upon. Those who propose to enter into marriage should be prepared to go the long haul.

Literally: When you are going to marry, ask.

Ask whom? Ask what?

Find out about the person you propose to marry. If the journey of marriage is long and one should stay married till death, then one must be cautious in choosing a partner. Making the wrong choice is an unfortunate mistake.

Literally: Marriage is not palmwine that may be sampled.

You either marry or not. You can’t taste the marriage to see if it is good before you decide to enter. To taste it is to enter it.

This proverb may be used by one who has regretted his decision to get married. Such a person would take consolation in the fact that had marriage been like palmwine, he would have first tasted it and discovered that he did not like it and therefore not enter it.

Literally: When a woman marries she takes her mother along.

Like mother like daughter. The upbringing a woman received from her mother while unmarried is what she will put up in her marital home. The Twi proverb which says “Se worepe wo yere mmerewammre mu ahwe a, hwe w’ase,” literally, “If you want to know how your wife will look when old, look at your mother-in-law” somehow captures the same point.

Literally: A wife is like a blanket: if you cover yourself with it, you itch; but if you put it away, you feel cold.

It may be good to have a wife but there are down sides as well.