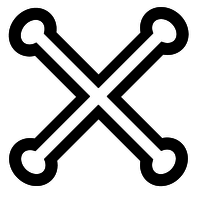 Nyame Nwu Na Mawu means “God won’t die for me to die.” It is a symbol expressing the immortality of the human soul, expressing faith in God to preserve one’s soul.

To say God won’t die for me to die is to assert that the only way I can die is for God to die; but since the immortality of God is a given, this means I also cannot die.

This statement is interesting for of its superficial incoherence. We all die and, worse, do not have seem to have control over the forces that mediate our demise so what is the sense in asserting your dominion over death?

The centrality of God in the lives of its inventors is a realization that jumps at anyone who studies Adinkra. Gye Nyame, Nyame Dua, Nyame Birirbi Wo Soro, Nyame Nwu Na Mawu, and so on. In a bygone era, the prevailing narrative concerned the dearth of spirituality and the knowledge of God among the inventors and their distant relatives. However, the preponderance of God-themed Adinkra proves there was serious thought about God–his power, his attributes, his domain of influence. It is possible that this was influenced by the Gospel as Adinkra were invented only a few centuries ago but, even then, the inventors should be credited for making the message their own.

Nyame Nwu Na Mawu is a bold declaration of faith by the declarant that his life is hidden in God and therefore the one who wants to take it must first take God’s life before he can get to him. Just as Paul describes in one of his epistles that the life of the Christian as hidden in Christ with God, … The quest for immortality has been abiding meditation for generations of thinkers but this confession overlays it with a dimension of faith. God cannot die therefore I cannot die. The reason he cannot die primarily does not rest in his ability to keep himself but in God’s power and insurmountable authority which he exerts over the creation.

Physical death, spiritual death, legacy death, idea death. There are many kinds of death one could experience just as there are many kinds of life one can experience. The symbol is an x cross of what appears to be two bones. In a chemistry lab that would be superimposed by a human skull to indicate that a substance is toxic. When one dies and his flesh is rotten, the bones remain. Maybe that is the reason for using them in this symbol. The bones remain for a long time—they can last for thousands of years—after the breath is gone and the flesh is rotten. The enduring quality of this part of the human body is an apt sign that he will thrive, in spite of his absence in a typical form.

Regent University College of Science and Technology uses this symbol in its logo because its founder believes in what it represents–desire for our work and legacy to abide when we are gone; a prayer to see continuity and refinement in what we started; a request for God to defend us when we are unable to. By entrusting our lives into his hands, we take relieve ourselves of the unsatisfiable burden to protect ourselves in the arena of malicious yet invisible spiritual activity. In the scheme of the inventors, it is the height of naivete to be oblivious of the existence and activities of such forces.