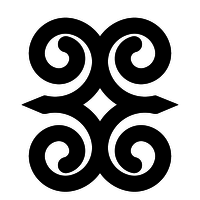 Dweninmmen means “the horns of a ram.” It represents strength (in mind, body, and soul), humility, wisdom, and learning.

What is it about the horns of a ram? They are strong; they are fierce; they can be intimidating; they are a defense. Dweninmmen is a symbol of strength with humility. Sheep are humble and can be easily guided. They can be led to and away from food at the shepherd’s will, much unlike goats.

Humility is a cherished virtue among the Akans. Modesty in dress and lifestyle is upheld and there are perpetual reminders of the finitude of life. For instance, the adinkra symbol Owuo Atwedee is one of such reminders. The saying goes that everybody will climb the ladder of death. It is a warning that strong and powerful though one may be, death is inevitable. We have overcome death and all our attempts at inventing potions that will conquer it have failed. There is at least one force—call it nature, call it God, cal it whatever—that operates in the affairs of men and that prevails in the end. To be humble is to order one’s life and arrange one’s affairs with this in mind.

Modesty amid wealth and good fortune does not come easily to everyone. Perhaps this is due to the notion that everything that happens in one’s life is by his own doing. There are those who believe that the wealth of the wealthy and the poverty of the poor are all attributable to their respective personal efforts. Given this scheme of thought, one is justified to commend himself for his success and to look down on other’s who have not been as successful. If success is the proof of one’s general merit and failure is the disproof of the same, then inordinate superciliousness is a warranted and justified response from the rich and powerful to their fortune. Is this right?

It exhibits vertical symmetry because it is actually a picture of two opposing horns. That is the orientation of horns of rams when they fight. The scene can be quite mesmerizing as they move away from each other and then run towards each other at top speed to smash their horns against each other. One can imagine it must be a rather frightful experience for at least one of them if not for both. In an attempt to establish dominance and authority, these otherwise humble creatures deem it necessary to hurt themselves if they have to, all so they can prove a point. But to whom? Humans have not proven superior to this base instinct animals so frequently display publicly. We want to be respected. We want to be acknowledged. We want to be loved. When that does not happen we want to show that those who made it not happen were wrong. Sometimes there is huge cost involved in this demonstration yet we deem it necessary. Perhaps another perspective is needed. Perhaps the ability to hold oneself in check—the ability to restrain oneself when provoked should be cherished as an even higher ideal.

Dwennimmen is a central component in the logo of the university of Ghana. The founders of Ghana’s premier university saw rightly for it is an apt reminder that though knowledge puffs up and strength puffs up, it is possible to wield both with humility—with an awareness that they are gifts to be shared with humanity.

Akan proverbs on pride and humility