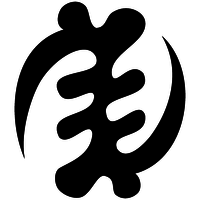 Gye Nyame means “Except God.” It expresses the omnipotence and supremacy of God in all affairs.

Gye Nyame is arguably the most popular Adinkra symbol. It expresses the deep faith the Akans have in the Supreme Being, called by many names and titles including Onyame (Nyame), Onyankopɔn, Twereduampɔn (the reliable one), and many others.

In the Akan scheme of things, God (Nyame) is omnipotent, omnipresent and omniscient.

Gye Nyame has become an icon of all Adinkra, encapsulating the faith of an African people who see God’s involvement in every aspect of human life.

The expression “Gye Nyame” can be used in many ways. For example, it could signal the necessity of God’s intervention in a difficult situation which transcends the ability of man to resolve. It could also be used to show the relative greatness of a task or entity. For instance, by saying “Obiara ntumi nku me, gye Nyame,” (literally “Nobody can kill me except God”) the speaker signifies his hardiness as well as his faith in God to protect him from harm.

As one of the most popular Adinkra symbols, one would expect to see Gye Nyame in at least a few logos.

This expectation is fulfilled in a few logos I was able to find.

As I have already noted, tertiary institutions in Ghana love Adinkra. Most of them use Adinkra in one form or the other in their logos and other emblems.

Gye Nyame can be found in logos of the University of Cape Coast, a public university, and the Catholic University College, a private university.

The Gye Nyame symbol is the most visually striking aspect aspect of the logo of the University of Cape Coast, being prominently displayed as a red symbol on a yellow background, centred in wavy white and blue stripes.

In the logo of the Catholic University College, the Gye Nyame symbol is overlaid with a cross.

Does the Gye Nyame symbol represent any physical thing?

According to Eglash, Bennett, Lachney, and Bulley, the knobs or lumps down the middle of the symbol represent the knuckles on a fist, a symbol for power. They also say the curves at each end do not represent any one particular living shape but are an abstraction for life itself. Though I have not been able to independently verify these claims, beyond them seeming plausible, I remember a reference to the clenched fist being the origin of the Gye Nyame symbol during a programme on TV in the mid-nineties. Unfortunately, I don’t remember exactly what the programme was about or what the circumstances were. This gap calls for more research.

Literally: Nobody teaches a child God.

God is everywhere and we can know him through his creation which even children can see. Hence, even children don’t need anybody to point out that there is a creator (obooadee) who is the Supreme Being.

This is a pervasive Akan world view that is so strongly held that it is the rare Akan who does not believe in God. Saying that even children do not need anybody to tell them that God exists suggests that it is foolish for an adult to claim He doesn’t.

Literally: God won’t die for me to die.

God is the one who sustains man’s existence. God is immortal and if man’s spirit is united with God’s, then God has to die for man to die but this can’t happen. Hence, man is also immortal. This idea is exhibited more clearly when the proverb is rendered as “Nyame bewe ansa na mawu” with literally translates to “God will die before I die.” Someone who quotes this proverb may be trying to signal to another who is threatening his life that he does not fear death or what man can do to him.

This proverb is also sometimes rendered as “Nyame bewu na mawu.” This literally means “By the time God will die, I would have died.” Yes, this also shows the immortality of God, at least with respect to man. However, I’m not so sure how that is supposed to mean the same thing as “God will die before I die.”

God is great and mighty and all things that have to do with him are equally great and mighty. One human being cannot overpower God, or thwart his will, or stop him from being who he is.

This proverb is used to solicit the help of others when there is a great task to be accomplished. Then the great task is like God’s eye and the inputs from the contributors are like hands trying to cover it. The more the hands, the faster the task can be accomplished.

Could this also mean that God is omnipresent and sees everything what goes on everywhere and no single person can block God’s view from his (the person’s) clandestine activities?

Literally: For the animal who does not have a tail, it is God who brushes his body.

Animals use their tails to brush flies and other things from their bodies. What is an animal to do if he does not have a tail?

This proverb is used to indicate that God provides for his creation. One may not have the qualities or characteristics of another but all are catered for. Hence, even someone who may seem disadvantaged has qualities that sustains him.

It can also be understood as God defends the defenceless. In this regard, the proverb is similar to “Wobu koto kwasea a, Nyame hwe to to” which literally means “If you cheat the crab (presumably by bending over to pick him from the ground), God sees your buttocks (your shame).”

Literally: If you want to say something to God say it to the wind.

God is omnipresent. He is everywhere. You don’t have to go to any particular location to talk to him.